While other four-doors are sober and serene, the sexy Rapide is flat-out berserk. It's shaped like a fighter-jet canopy and built from aluminum panels so pretty they shouldn't be painted. Unfortunately, 2019 will be the Rapide's final model year; an electric Aston Martin sedan to replace the Rapide is reportedly in the works but the timing of its launch is unknown.

The final Rapide is the balls-to-the-wall AMR model, which packs a 580-hp 6.0-liter V-12 engine under its shapely hood. The only transmission is an eight-speed automatic, and all Rapide AMR models are rear-wheel drive. Aston Martin claims a zero-to-60-mph time of 4.2 seconds. That's quick, but not as quick as the all-electric Tesla Model S Performance, which boasts a claimed 2.4-second zero-to-60-mph time when equipped with the aptly named Ludicrous mode. Speaking of all electric, Aston Martin is rumored to be working on an electric version of the Rapide, called Rapide E, which will reportedly make at least 600 horsepower from two electric motors and deliver a driving range of more than 200 miles. 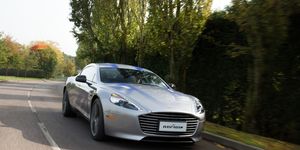 The Rapide E Will Be Ready for the Racetrack 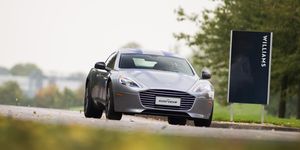 We Drive the Rapide E

The Rapide is a big car, but the low-slung roof limits headroom in back. So it's not a limousine—take something else to the Oscars. It doesn't matter; every trip in the Rapide is a red-carpet event. The cabin is lined with fine leather and real metal accents; it certainly looks stylish and upscale. Unfortunately, it's an ergonomic nightmare: the power-adjustable seat controls are located on the center tunnel, the seatbelt anchors are difficult to reach, the front-seat footwells are cramped, and the transmission utilizes a push-button gear selector located on the center stack. For those who can deal with these issues—some may see them as quirks or as part of the brand's character—the Rapide is a rare and unique choice in the ultra-luxury sedan marketplace.